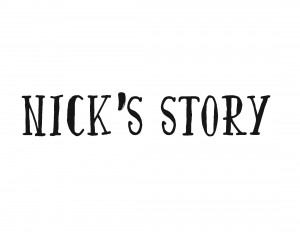 Yesterday hurt…a lot. The pain started when my personal computer, a lifeline to my world, crashed.  After a frantic visit to my geek squad, the problem was diagnosed and resolved with a state of the art HDMI cord.  Alas, on the way home from said squad, a car slammed on its brakes sans taillights and my lifeline toppled head over heels from its precarious perch. Thudding sensations chewed the pit of my stomach. After arriving home, further consultation with the aforementioned geek squad ensued.  They resuscitated my lifeline. I could hardly believe my luck. Fifteen minutes later, my glee met a swiftly-rolling swivel chair abruptly toppling over a cord left on a hard tile floor. I smashed my occipital region on a hard tile floor. The fall left me overwhelmingly nauseated and frustrated. In short, it hurt…a lot.

Enter Nick, a One Tweak customer whose email was the first I read after picking myself up off of the floor.

I apologize for not getting back to you sooner. It had been a little while since I had checked email.

I have received my OneTweak pedometer and it was delivered in a timely manner.

As far as the pedometer itself is concerned, I love it! I love how simple and easy to use it is! I had been debating between getting a wrist mounted one (similar to a FitBit) and decided that was a little too complex for me. I have been wearing it every day at work, something I have not done in almost 12 years (when I was a night security guard and walked 12 miles a night). It has become part of my uniform now! I have not been able to wear it when I go walking on the local trail yet, it has been too cold.

I would like to thank you for reaching out to your customers and also for making a simple, yet fantastic pedometer. I am extremely happy I purchased the OneTweak pedometer! Again, thank you for your time and an amazing product.

Just WOW! I have an admission to make. Your email truly affected me–in good way, of course–because it was so genuine and unabashed. In a world awash in cynicism, your delight struck me as singularly delightful. It also reminds me to be a better customer…a better person, even. Thank you for the gift of a smile.

Congrats to you for being such a veteran walker. There is ample evidence that walking confers feelings of well-being along with phenomenal health benefits. If you’ve read my story on our website (Share Your Story segment), you’ll see my first-hand account of how walking changed my life. Methinks you know all about it! Twelve miles a day rates way up in impressive territory.

Thanks so much for your feedback and for choosing OneTweak!

Today, I received the gift of Nick’s story. It made me forget about the pain in my head while it put a smile in my heart. Simple kindnesses can do that.

Thank you for the nice reply! You have inspired me to share my story, something I rarely do! If you would like to use it on your website or blog, please do so. I don’t think it is terribly exciting, but it is my story.

I grew up in a small town, we walked every where! I would walk to school, work, to my friends’ houses, etc. This was a habit I carried on in to my teenage and young adult years.

Towards the end of high school, I took a job as a park ranger. Walking played an almost daily role in my job duties. I was employed seasonally at one park, took some time off and then went to another park closer to home. I would even walk to work.

I continued working as a ranger almost my entire way through college. However, my inactivity during my off months combined with a college diet began to take it’s toll. I ended up at the heaviest I had ever been, I was well over 200 lbs and I am about 5’9″.

After college I took a job as a night security guard at a local zoo, this was my first experience with pedometers. I was curious how much I walked on my nightly rounds, I found out a basic (no extra duties) was 12 miles! The weight melted off me!

I left that job to broaden my horizons, and became employed as a restoration tech for a company that dealt mainly in fire and water damage. While it was physical, I still missed walking. After a difference of opinions I was forced to leave.

It was at this time that I found my current employer. I started as a driver/messenger for an armored car company, and did I love it! Lifting and walking, why join a gym. After almost four years I was promoted to Assistant Manager of a department (now I drive a desk). After a few doctor’s visits and discussions about trying to have a baby with my wife, I noticed old habits were catching up to me. That and my blood pressure was rising. I decided to make a change.

I started eating better and decided to start walking again. Jogging has always bothered me due to an old sports injury. It was at this time I decided to get another pedometer, I considered something fancy/flashy but missed my old simple one from the zoo. After finding OneTweak, I decided that was right for me. I now wear my pedometer as part of my daily uniform. I am even known to pace around our dispatch center (my office). I have to get my steps in!

I apologize for the lengthy email, but I wanted to share my story.